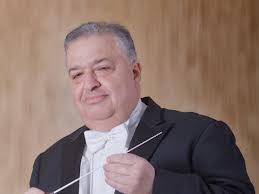 LIOR SHAMBADAL: Israeli conductor Lior Shambadal maintains an active career as both an artistic leader and guest artist on both orchestral and opera podiums throughout Europe, as well as in China, Japan, Korea and South America. He currently serves as the Chief Conductor of the Berliner Symphoniker, a post he has held since 1997. During his tenure there, he has led more than 150 concerts at the famed Berlin Philharmonie, and has conducted the orchestra in hundreds of performances on tour in Japan, China, Korea, Italy, Spain, Ireland, England, France and Germany. In 2009, he was also named Music Director of the Orchestre Filarmonica de Bogota. Since 2008, Shambadal has been the Principal Guest Conductor of the Liepaja Symphony Orchestra in Latvia, as well as a guest professor and Principal Guest Conductor of the Chengdu Symphony Orchestra of the Central Music Conservatory in the Sichuan province of China. In addition, he works regularly with the Festival of San Gemini in Italy, where he serves as permanent member of the artistic committee and leads master classes for conductors and, since 2007, he has appeared annually as a guest artist for the orchestra training program at The Banff Centre in Canada. He was born in 1950 in Tel Aviv, where he studied viola, trombone, composition, and conducting. His studies took him to the Mozarteum in Salzburg where he worked with Carl Melles. Moving on to Vienna Mr. Shambadal had been tutored by acclaimed conductors such as Hans Swarowsky, Carlo Maria Giulini, Igor Markevitch, Sergiu Celibidache and Franco Ferrara. Lior Shambadal expanded his studies in other areas such as electronic music (in Vienna) and composition taught by Witold Lutoslawski (in France). In 1980 he was appointed Chief Conductor of the Haifa Symphony Orchestra. From 1986 to 1993 he led the Kibbutz Chamber Orchestra in Tel Aviv. As the sole founder of the ensembles Acoustic 7/11 and Musica Nova Lior Shambadal proved himself a prolific composer whose musical range includes chamber music, song writing, and symphonic orchestra pieces. From 1993 to 2000 Mr. Shambadal was musical director of the Pfalztheater in Kaiserslauten (Germany), and from 2000-2003 he served as the Chief Conductor of the RTV Symphony Orchestra in Ljubljana, Slovenia. His CD and television productions have made Mr. Shambadal internationally famous, supported by his guest appearance conducting international orchestras.