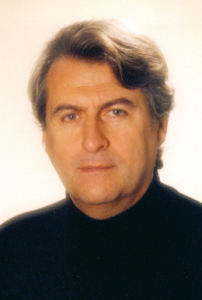 JULIUS KALMAR: Maestro Julius Kalmar is one of the most distinguished conductor of our times and has been a pupil of legendary conductor, Hans Swarowsky, whose pupils include Zubin Mehta, Mariss Jansons, Claudio Abbado, and among others, and  continues to carry the great tradition of Hans Swarowsky. He has also been a pupil of Sergiu Celibidache. Maestro Kalmar, born in Romania, is a German citizen. For the 2003-04 season, he was given the honor to conduct  a six months colossal project, the opera La Bohème, at the Hamburg. State Opera for the German Government. Maestro Kalmar has served as Principal Conductor of Volksoper in Vienna, Austria (1983-1988), the State theater of Mainz, Germany (1976-1981), State theater of Aachen, Germany (1967-1970), and State Opera of Bucharest, Romania (1967-1970). In addition Maestro Kalmar has toured extensively as conductor in major concert cities such as Hamburg, Munich, Mainz,Antwerps, Lüttich, Milan, San Pellegrino, Genoa, Follina, Messina, Catania, Cosenza, Reggio Calabria, Taranto, Bucharest, and etc… in Europe, Taipei, Kaoshiong, Tokyo, Nagasaki, Miyazaki, Fukuoka, Dazaifu, etc… in Asia, and Bahia Blanca in Argentina. Maestro Kalmar has served as assistant to Karl Österreicher (the successor of Hans Swarowsky) in the Orchestral Conducting Department of the Hochschule für Musik und darstellende Kunst of Vienna (1981-1994) where he now is a faculty member. He is the Dean of the Lyric and Opera Division, and Director of the Opera Workshop Class at the Hochschule für Musik und Theater in Hamburg. Maestro Kalmar has given numerous lectures and masterclasses at the Wiener Meisterkursen (1982-1997), and in Italy, Argentina, Taiwan, Hungary, and Greece. He also has been jury member of international music competitions worldwide. Maestro Kalmar speaks fluent German, French, Italian, English, Russian, Rumanian, and Hungarian.